“To succeed in life, you need three things: a wishbone, a funny bone and a backbone.”- Reba McIntire

The quote above kind of resonated with me because when you think about someone who wants to run an ultramarathon. The three things shes lists, are actually pretty essential. And my goodness, did I see a lot of wish bones, funny bones and backbones this past March.

In my 3+ years of this whole ‘distance running’ thing. I’ve met a lot of amazing people. Sprinters, 5k-ers, marathon maniacs and ultramarathoners. With my boyfriend being an avid ultramarathoner, some pretty amazing people have crossed my path. I don’t care what you say, there’s something really special about the ultra running community. Something a little bit different than other running communities. It takes a certain type of person and mind set to decide to run more than the 26.2.

My friend Leslie is one of those people.

The Backbone Trail is a 68 mile stretch through various state parks in the Santa Monica Mountains. Starting at Will Rodgers State Park in Santa Monica, it twists and turns all the way to the Ray Miller Trail at Point Mugu State Park in Malibu. It wasn’t until recently that the trail was re-opened and of course, someone jumped on the opportunity to do an ultra on this trail.

With both a 100 mile race and the 68 miler (110k), about 200 runners toed the line on that cool Saturday morning and took on the challenge; one of them being Leslie. It all started with a 3:30am wakeup call. We packed the car full of camping gear and set off to Santa Monica for the start. We didn’t know when we’d be home be we knew it was going to be a long day. When we arrived you could feel the excitement and nervousness. This was the inaugural race on this trail so no one really knew what to expect.

After what felt like an hour long lecture from the RD, they race finally started. Beth, Leah and I watched Ultra Leslie start out on her 68 mile advenrure across the Santa Monica Mountains!

With Leslie off running, Beth, Leah and I packed up the car and headed out to our first aid station. Crew didn’t have access to every aid station during this race, so we had some time to kill before we would see Leslie.

We stopped quick for some coffee and food, and then headed into the mountains for the Mile 11 aid station at Trippet Ranch.

We grabbed everything we thought Leslie would need: food, ice, sunscreen etc. We wanted to be prepared for whatever she felt she needed.

It’s a lot of waiting. A lot. You really only see your runner for maybe a few minutes at each aid station and those are still the only ones we’re allowed access to. I can’t complain though. Spending the entire day out in the mountains helping your friend complete a tough race and witnessing all the other runners do the same it not the worst thing to do on a Saturday.

Anyways. Leslie came running in like a champ into the aid station right around when we expected her and got her on her way. 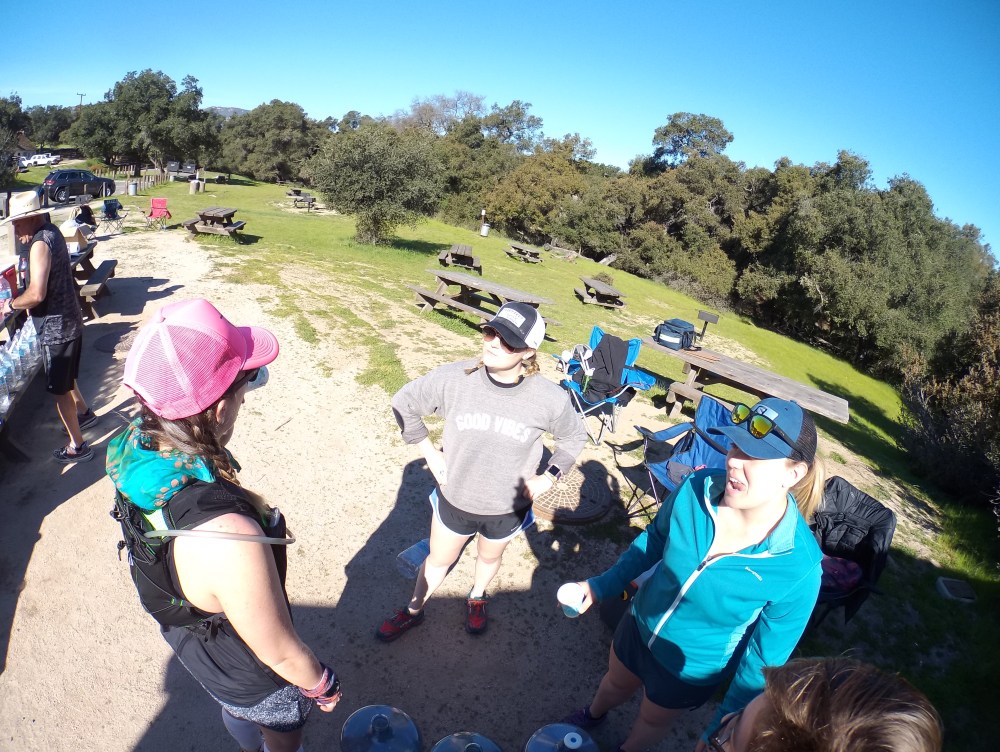 Next stop? Mile 18 at the Stunt Road aid station!

This was by far, the aid station with THE BEST view. We drove up this winding mountain road and found ourselves parking on the side of this amazing ridge! Pacfic Ocean on one side and an amazing view of various mountain ranges on the other. See below:

Like I said, the view was bonkers. They even has a sign over on the mountains side indicating which mountains were which.

After we set up camp for a bit, I noticed the aid station was getting a little chaotic so I decided to jump in and help while we were waiting. While it wasn’t insanely hot that day, the sun was very prominent so I grabbed a bucket full of ice and some sponges and started wetting people down. Most loved it because it cooled them off but more because the cold water kinda shook them awake.

Soon enough our trusty Coach Chris came down the ridge looking great! He always looks like he’s having a good time. He grabbed some nutrition and quickly kept moving on.

Soon enough #UltraLeslie was coming down the ridge! And of course she was looking FLY as always.

After a quick sponge bath courtesy of yours truly, and a change of shoes, she was off!

You’ve probably started to notice at this point that crewing is indeed, a lot of waiting and mostly doing the same exact thing at every aid station. Wait, wait, wait, runner comes in, ‘what do you need?’, give them whatever they need and get them back on their feet and moving ASAP.

But it’s so fun to see your friends get closer to grabbing that goal.

Next stop? Mile 25 at the Piuma Trailhead!

This is the point in the race where it would be the longest gap between crew-accessible aid stations. Piuma was mile 25 and the next aid was at mile 43 in Encinal Canyon. So that’s a good 18 mile gap and probably around 4-5 hours.

We were all pretty hungry at this point so we drove into Thousand Oaks and grabbed a late lunch. To be honest, we had been up so long at this point that it felt more like dinner. Ha!

After lunch, we stocked up on some more snacks and water and headed back to the trails. It was only about a 20 minute drive so we unloaded our chairs and bags and set up camp at mile 43.

We noticed the runners really started to thin out here and some were even dropping out of the race at this point. We were told the trails were becoming quite hot and it was starting to get dark so I think some runners wanted to be done.

Leslie rolled in a little bit later than expected and this is where we started to see the fatigue set in. We got her a change of clothes, some snacks and even a beer so her spirits still seemed pretty high. However, the dark was a factor so we were all a little more concerned sending her out of the aid station at this point.

Leslie was well equiped and moving on so we packed up and set off for Mishe Mowka mile 52!

It was fully dark at this point and the roads to get to this aid station were very twisty and hilly so that told me we were in deep in the mountains. Once we pulled up, we could already tell this was the best aid station by far. They had lights strung up, music playing and this woman was making various soups, burritos and breakfasts for anyone that wanted to eat.

So we set up camp, strung up some of our own lights and even cracked open a little wine to pass the time.

We expected Leslie to roll in around 8pm since it was about 9-10 miles from the last aid station. We were told by other runners that this section was fairly easy and that most of the climbing happened during the earler stages of the race. However, we didn’t see Leslie roll in a good hour or so after her projected time. We knew she was spent, her spirits were down and it was time to make a very difficult decision.

50 miles in. WHICH IS STILL AMAZING. But in the mind of an ultra-runner, it’s tough not to think of this as failure. Leslie was caught between a rock and a hard place (literally and figuratively) and it was time to decide. Luckily, the thought of keeping her body fresh for other goals set for the year ahead made the decision a little bit easier.

It wasn’t worth destroying her body to get a finish and be out the rest of the year.

It was the right call.

So after a day of ups, downs, sun, sweat and some tears, it was time to pack up the car one last time and head home to our beds. Even though UltraLeslie didn’t get that finishers medal, I don’t think any of us regret any part of that day.