***Disclaimer*** There will be ALOT of pictures in this post!

Good morning internet. It is Sunday and I’m here to tell you about the Gorge 100k. While you were all sleeping in, I helped crew this race for 4 very good friends (one being my bf) up in the Columbia River Gorge in Oregon last weekend.

The Pacific Northwest had always been a region of the country where I didn’t think I would ever get to. I don’t have any friends or family there and it’s not a region I would pass through going back east. It was always this mysterious area that I knew was incredibly beautiful but couldn’t imagine myself going there anytime soon.

That changed last week. One strange night many moons ago, my bf Rocky and his running friends decided to push the button on signing up for the Gorge Waterfalls 100k up in Cascade Locks, OR. They had all been convinced to sign up because of this video by The Ginger Runner. (Note: This video is of the 50k course that is point to point but the 100k does the same route as an out and back.) With the promise of stunning scenery and tough terrain, the boys were hooked and wanted in on this race.

This became my chance to see the PNW! I try my hardest to always go and see Rocky race no matter where it is. We support each other as much as we can even though our goals are so vastly different. Fortunately, he decided to take on a race in a new place!

I didn’t want to take a ton of time off for this trip to save my vacation days for other trips in the year so I decided to take the first flight out of LAX (which was exhausting) but oh well! It was going to be worth it in the end. Rocky flew up a day earlier so he was able to pick me up from the airport Friday morning. I have to say, the Portland Airport was STUNNING. I’ve seen many airports in my day but Portland 100% take the prize.

As we drove to find some breakfast, the first thing we saw out the window was Mt. Hood. As soon as I saw that, I knew I would love it here.

After spending some time in the city, 4pm hit and we decided it would be good to get to the hotel, get settled, find some groceries and get dinner before an early bed time. We took the highway east of the city for about 30 minutes and found ourselves in Cascade Locks, OR. Let me tell you, the drive there was amazingly pretty. We could see the Columbia River, the mountains in the distance and flowing waterfalls. And this was just on the drive to the hotel!

We got to the hotel and realized we were staying right next to the Bridge of the Gods. If you’ve ever read the book Wild by Cheryl Strayed or seen the movie, this bridge is where she ends her trip on the Pacific Crest Trail. The trail continues on over the bridge which serves as the border between Oregon and Washington State!

Cascade Locks is a tiny little town where it’s main purpose it to host people on road trips or just trekking on the PCT. There’s a hotel, a small grocery store and a handful of places where you can get a good cup of seafood chowder and really nothing more. And honestly, it was great!

Our group headed over to the local ale house for a pre-race dinner and to talk strategy for race day. We had 4 runners from Fleet Feet taking on the race as well as other friends from SoCal. The plan was to try and hit as many aid stations as possible and then make it to the finish.

After a fairly decent night sleep (decent for getting up at 3:30am) we all headed over to the start line near Multnomah Falls State Park. The parking situation at the start was pretty bad so they sent us to another lot less than a mile away. Long story short, I didn’t make it to the start after some bad directions from other runners… OH WELL! On to the first aid station. (Well not really the first, crew members weren’t allowed to the No Name station because parking was very limited).

Aid Station #1: John Yeon Mile 13-  We arrived with plenty of time so Molly, John and I decided to hike in to the Elowah Falls. According to the sign, it was less than a mile. We knew today was going to be alot of waiting so why not explore? The terrain was crazy. Crazy beautiful, crazy rocky, crazy slippery. This race was no joke if the trails were mostly like this. We hiked through the forest that looked like it was right out of Lord of the Rings and made it to Elowah Falls. HOLY CRAP.

I mean…. I’ve seen waterfalls before but I’ve never been this close to one this size. It was incredible. I think we all stayed there for like 10 minutes just staring at the thing. Feeling the mist on our faces and the mud beneath our feet… it was like something out of a book. I didn’t want to leave but we had a job to do. Rocky was going to roll through the first aid station soon and we wanted to be there. After marveling for a few more minutes, we climbed back up out of the gorge and back to the aid station.

Right when we expected, Rocky rolled through with a smile on his face (of course). Refilled water, grabbed some food and was on his way! About 45 minutes later, Steve and Jaime rolled through also looking good! We grabbed their headlamps, trash and other items to lighten their load exchanged high fives and they continued on! We loaded the van and motored over to aid #2!

Aid Station #2: Cascade Locks Mile 22- Yes, you are correct! This aid station was right near our hotel. It was really fortunate for us of we needed to drop anything, use a real bathroom with actual running water or even grab a hot cup of coffee. The weather was nice but it was still slightly colder than what we were hoping for. The hot coffee was a real nice perk here. And… we waited. It would be about 30-40 mins until we saw Rocky and then about another 40 until Steve and Jaime. We chatted with some friends we found also crewing which helped pass the time. I mean, it wasn’t the worst thing to be out in the woods all day. No complaints here.

Right on time, Rocky rolled in. Always with a smile on his face. Still feeling good but he knew there was a lot of race ahead of him.

Shortly, after Steve and Jaime! The plan was working. We had our timing just right and we were able to see all the boys at each station so far.

Aid Station #3: Wyeth Campground Mile 31– They’re halfway there! First 50k done at this aid station. This station was at a campground and really easy to get to. I have to say that this entire race was pretty easy to navigate. My only complaint was the highway. Not every exit had an on/off ramp for both east bound and west bound. More than once we would have to overshoot our destination just to be able to get off the highway on the correct side. Annoying. ANYWAYS. This part of the course was (obviously) insanely beautiful. Spring was most definitely in the air because at one point, it was like snowing pollen. I’m not kidding. There was so much pollen in the air it looked like snow.

This is where we started to see the boys slow up a little bit but can you blame them?! 31 miles! And they still had ANOTHER 31 to go? Seriously, watching them race is one of the coolest experiences. So much heart and perseverance is required to do something like this. They all continue to inspire me every day. 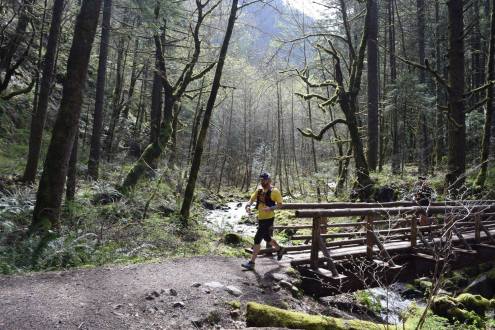 followed by Steve (and then Jaime after)!

After some snacks and a refill of water bottles, the boys were on their way. They were halfway there!

Aid Station #4: Cascade Locks Mile 40– Annnnnd we’re back! This was the aid station near the hotel (thankfully). After a quick bathroom break and some pizza, Rocky was rolling in! This was the first appearance of wacky wave inflatable arm flailing tube man. Seriously, this guy really boosted everyone’s spirits!

Jaime jogged in about 40 mins after Rocky and Steve shortly after! With a quick change of shirts, shoes and a restock on gels and electrolytes, the goal for all the boys was to keep moving forward.

**Note: We ran into Chris K’s mom and dad here and heard he had made it past the half way point. Way to go Chris!

We had this all down to a system now. Once we saw Steve jog off onto the trail, we headed back to van and motored over to the John Yeon station again.

Aid Station #5: John Yeon Mile 49-OOOOOOF. 50 miles. As we waited here the sun was starting to get soft and it was inching close to dinner time. Sure enough, Rocky comes rolling down the hill with sleepy eyes and tired legs. At this point, the race became all mental for him. Push through the pain and it’ll all be over soon. Unfortunately, Steve had to drop from the race here due to some muscle cramping. He could have pushed through but being the smart athlete that he is, dropping was the best way to preserve his legs for future races. Proud of you Steve! 50 miles is still AMAZING!

The Finish Line: John, Molly and I made our way over to the finish to set up Hammock Heights to rest our legs and wait some more. There was TONS for food and beer and even a tent for freshly made pizza. These runners came across the finish line with alot of amenities. Sure enough, Rocky strides across the finish at 13hours and 5 mins.

Jaime rolled in about an hour later! To be honest, they both looked really really strong!

CONGRATS GUYS! Another 100k in the books!

So this may have not been the most exciting post. And that’s probably because I don’t have a race recap. BUT I feel like this post really encompases the feeling of crewing a race.

What I learned? It’s a lot of waiting. But to be able to see the faces of your good friends a handful of times during a grueling race? Worth every second. I hope that we made a difference out there even if we only saw the runners for a grand total of 20 minutes.